Saturday, February 27, was a great day for CIF Finals in Girls Water Polo, both in the Southern Section (SS) and the San Diego Section (SDS). Although I would like to have been able to report on both, no such luck, but it was a pleasure to be in La Jolla at the Coggin Family Aquatic Center —  a beautiful setting to crown four SDS Champions, two of whom I witnessed, in order to evaluate teams and players — since  I missed those folks earlier in the week of semi-finals.

Top two seeds, Hilltop and Serra, were both ready to battle for their respective school’s first-ever CIF titles in Girls Water Polo. From this neutral observer, it appeared that each team had a case of the jitters, but in two different halves of play.

The Hilltop Lancers had a wonderful first half, scoring at will and taking a strong 7-2 lead. Due to great team defense, their goalie, Daniela Diaz-Grade, had no threats, no saves. The goalkeeper on Serra Conquistadores, Elizabeth Ferreira, on the other hand, was pummeled. Out of eight shots, seven went in and one missed the cage. Goals were scored by the star #2, Sophia Espinoza, who ended with 2 goals, 4 steals, and drew a critical penalty shot, and #9, Senior Priscila Rude, 1 goal, and a second critical penalty shot. The only thing was, along with her 8 saves in the second half, Ferreira blocked both 5-meters as well! And her team scored and scored, with 2 goals each by Tristan Langley and Savana Vander Schuit. Unfortunately for Serra’s second half shutout, the three first half goals by Junior Mildred Monsivias and eight second half saves by Diaz-Grade, sent Serra to Runner-up status, and Hilltop to the Championship. 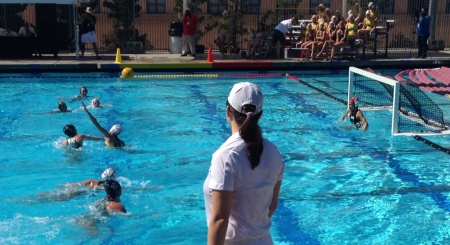 Hilltop’s #3 Mildred Monsivias scores her third goal on a lob, the eventual game-winner.

And what a great game this was! Just like Division III, Division II featured two new teams never having won a CIF Title, Mar Vista and Scripps Ranch. In this case, both teams came out at a top-varsity-level of play the entire game, unlike the DIII contest, which appeared J.V. at times.

Pre-game comments from Scripps Ranch Head Coach, A.J. Farrell: “We’re in the Final. We expected to be here. (Others might not have.) In the Quarter-Finals, we needed to ‘send a message.’ We did. In the Semi-Finals, we needed to remind ourselves, ‘this is our time.’ Now, for the Finals, our players just need to ‘believe in our system.’ (That would be the UCLA Coach John Wooden system of ‘fundamentals, conditioning, teamwork’ — with these three things, teams succeed!)

From the outset of the game, it was apparent that the Scripps Ranch Falcons did believe, jumping out to a 5-1 lead early into the second quarter with 3 goals from Senior Co-Captain Hannah Erbe-Smith and 2 goals and an assist from Junior Set Stephanie Soto, while Senior Goalkeeper Samantha Runyon racked up 7 saves and a long-ball assist to Soto. (Runyon ended up with 12 saves for the match.) Unfortunately, midway through the third, with the Falcons up 6-5, star player Erbe-Smith was ruled out for the remainder of the game on three personal faults, and neither Soto nor Runyon nor the rest of the team, including five more Seniors, could contribute to add points to salvage a win. At that point, the Mar Vista Mariners juggernaut pushed into gear, with Senior Co-Captains #3 backdoor Stephanie Morales, 2 goals, #6 attacker Isabelle Hastings, 3 goals, 3 assists, 4 sprints, leading the way, along with Junior driver Daniele Pena, 2 goals, 2 steals. And let’s not forget the outstanding back line saves by Junior Sarah Carr — ten total, seven in the second half!

Post-game comments from Mar Vista #6, Senior Co-Capt Isabelle Hastings, who had assists to both the game-tying and game-winning goals: “Wow. It’s overwhelming. For five of us, our Senior Year — we achieved out goal! It didn’t matter that we were down early — we came back! (Last year we had made it to Semi-Finals, but missed this opportunity.) We had positive energy. I think it was all of our fans love and encouragement that helped us to continue to play better — then finally win!”

Post-game comments from Mar Vista #20, Junior Daniele Pena, who had the game tying goal in the third quarter: “We did it! This Team accomplished everything we set out to…before the fourth quarter, we just said, ‘this is it. We tied it up in the third. Let’s stick to it and win!'”

For the record, Division I:

Also, for the record Open Division:

The Bishop’s School (26-6) beat top seed and cross-town rival La Jolla High School (25-5) in a defensive struggle by a score of 5-4, also earning the school back-to-back CIF-SDS Open Division Championships. (…interesting to note, La Jolla’s defensive strategy was to ‘hold Bishop’s to a handful’ of goals. They did. Sometimes life plays out in similar ways; you do your best, but it is not enough. My hope is all stay positive — and seek the next challenge.)

This entry was posted on Sunday, February 28th, 2016 at 2:10 am and is filed under Water Polo. You can follow any responses to this entry through the RSS 2.0 feed. You can leave a response, or trackback from your own site.